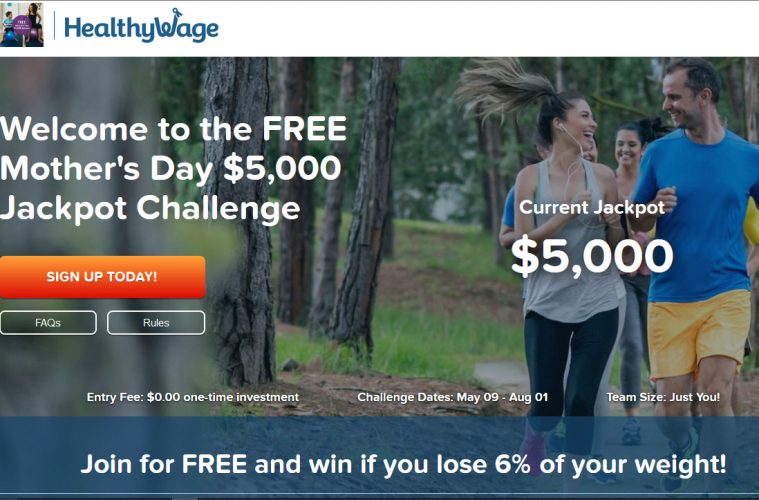 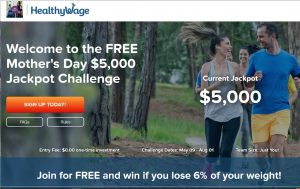 With reports indicating that, on average, one out of every three adults is obese (about 36% of the population) and that, “if U.S. trends continue unabated, by 2030, estimates predict that roughly half of all men and women will be obese,” both women and men are needlessly putting themselves at higher risk of serious medical conditions. This includes diabetes, coronary heart disease, stroke, and other health concerns as cited by the CDC. Couple that with the sad truth that COVID-19 is actually exacerbating the problem, with one March 2021 report finding that an overweight condition is “associated with the severity of COVID-19 and the need for hospital treatment.”

Understanding the need for serious intervention to get America’s collective weight-driven health trending in the right direction, HealthyWage.com is tackling the U.S. obesity epidemic head on. This includes cash prize-driven contests like its “Mother’s Day Jackpot Challenge” launching on May 9—the day when Moms are celebrated for their overall awesomeness. Through this initiative, company will pay moms and other challengers $5,000 cash for losing just 6% of unwanted body weight. Winning participants will equally share the prize pot while celebrating their slimdown success. While focusing on dieting for Mother’s Day might be a bit unconventional, HealthyWage is appreciably trying to change that by boosting the bank accounts of moms nationwide. 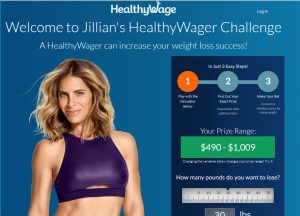 HealthyWage also partners with fitness-minded personalities to drive. One current example is HealthyWage’s current engagement with global health and fitness expert, businesswoman, bestselling author, television personality and creator of the award-winning The Fitness App, Jillian Michaels. She is advocating the company’s gamification approach to keep dieters engaged and motivated throughout their weight-loss journey … and paid with cash prizes that can range in the hundreds and thousands for their slimdown success. Toward this end, Michaels recently announced the launch of the “Jillian Michaels HealthyWager Challenge” on her Instagram page.

Jillian is not the only famous personality helping folks get fit and paid with HealthyWage. Earlier this year the company announced the continuation of its A-list partnership with Sherri Shepherd—an actress, comedian and best-selling author who formerly served as an Emmy Award-winning network talk television co-host. Amid the popularity of Sherri Shepherd’s initial “HealthyWager” initiative through which participants vied to win up to $10,000 by hitting their own personal weight loss goal, the esteemed television personality has again teamed with HealthyWage for a re-boot of the initiative … again giving participants a chance to win up to $10,000 by hitting their own personal weight loss goal. As an added bonus and point of motivation, those partaking in Sherri Shepherd’s HealthyWager challenge, which runs through June 18, 2021, will also receive a $50 cash bonus added to their grand prize. Sherri has already exceeded her own goal to lose at least 15 pounds in 6-months, for which she’ll win $500 for the achievement.  Sherri Shepherd celebrated the success of her second HealthyWage challenge in an endearing video on her Instagram page.

HealthyWage, which is the world’s leading purveyor of financially-induced diet contests for individuals and team-based weight loss challenges, is founded on research and “double-incentivization” methodology that proves cash rewards triple the effectiveness of weight loss programs. HealthyWage payouts are proof positive. Since the company’s inception, HealthyWage had collectively paid more than 30,000 dieters over $55 million cash for weight-loss achievements exceeding 7.5 million pounds shed.

“Studies show that monetary incentives serve to enhance the effectiveness of, and duly complement, weight-loss programs of any and all sorts, especially when paid out quickly like our various programs,” said HealthyWage co-founder David Roddenberry. “The average participant more than doubles their investment if they are successful at achieving their goal. The financial upside potential is impressive.”

A few notable HealthyWager success stories (both female and male) also exemplify the power of this approach. These include Jenny S. who lost a staggering 100 lbs. and won $5,135 for her slimdown success and Miranda B. who lost 81 lbs. and won nearly $3,000.00 for her efforts. From its website, HealthyWage.com shares yet more inspirational success stories of both women and men who gained financially for their pound-shedding achievements using the company’s unique and well-proven gamification approach. This includes Kristin W. who lost a staggering 114 pounds and won $4,000 for her efforts, Anastasia W. who lost 41 pounds and won a whopping $10,000 in kind, and Blake S. who lost an impressive 151 pounds and won $4,670 for his own slimdown success.

The efficacy of diet gamification is well-proven. For one, according to study findings published by JAMA Internal Medicine, behavioral economics-based gamification led to “significantly” increased physical activity among overweight and obese Americans. In this particular study, pairing a step tracking device with social incentives led to sustained, long-term behavior change—prompting participants to take more steps then with a step tracking device, alone. While the report explains that “gamification interventions significantly increased physical activity during the 24-week intervention,” with competition being the “most effective.”

Further validating HealthyWage’s well-honed approach, an additional study published in the journal Social Science and Medicine continue to prove that money is an effective motivator to “increase both the magnitude and duration of weight loss.” The same hold true in business for staff wellness initiatives. Results from one study published in the Annals of Internal Medicine indicated that “Loss Incentive’ Motivates Employees to Take More Steps,” finding that financial incentives framed as a loss were most effective for achieving physical activity goals.

“Throngs of studies reiterate the importance of the ‘stick’ in the design of a wellness incentive program, whether for individuals at home or for employee groups,” Roddenberry says. “Many studies have demonstrated that the threat of losing something of value is much more effective than the opportunity to win something of equal value. That’s precisely why we advocate that program participants ‘pay to play’ and make an investment out of their own pocket in order to win rewards—in our case large cash prizes—for losing weight and getting more active in the program.”

But, with respect to moms and HealthyWage.com’s “Mother’s Day Jackpot Challenge,” this year’s holiday can serve as a springboard to help them lose those unwanted lbs. and get paid for their slimdown success.

Forbes Business Council Member Merilee Kern, MBA is an internationally-regarded brand analyst, strategist and futurist who reports on noteworthy industry change makers, movers, shakers and innovators across all B2B and B2C categories. This includes field experts and thought leaders, brands, products, services, destinations and events. Merilee is Founder, Executive Editor and Producer of “The Luxe List” as well as Host of the nationally-syndicated “Savvy Living” TV show. As a prolific business and consumer trends, lifestyle and leisure industry voice of authority and tastemaker, she keeps her finger on the pulse of the marketplace in search of new and innovative must-haves and exemplary experiences at all price points, from the affordable to the extreme—also delving into the minds behind the brands. Her work reaches multi-millions worldwide via broadcast TV (her own shows and copious others on which she appears) as well as a myriad of print and online publications. Connect with her at www.TheLuxeList.com and www.SavvyLiving.tv / Instagram www.Instagram.com/LuxeListReports  / Twitter www.Twitter.com/LuxeListReports / Facebook www.Facebook.com/LuxeListReports / LinkedIN www.LinkedIn.com/in/MerileeKern.

***Some or all of the accommodations(s), experience(s), item(s) and/or service(s) detailed above may have been provided or arranged at no cost to accommodate if this is review editorial, but all opinions expressed are entirely those of Merilee Kern and have not been influenced in any way.***