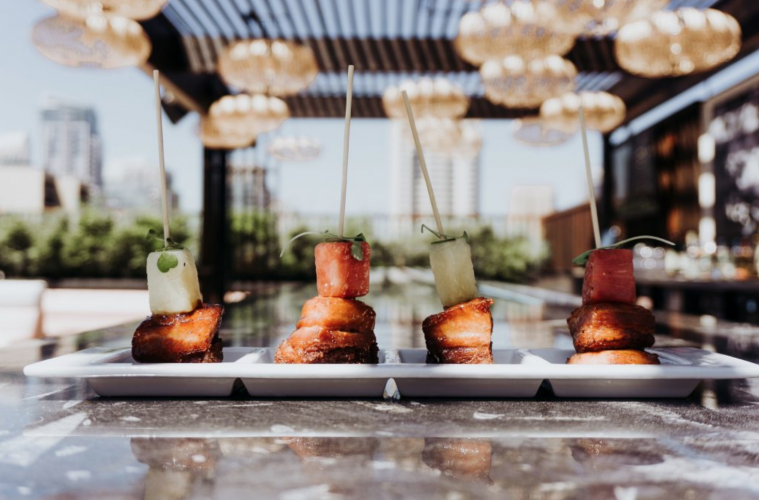 Heading to the West Coast anytime soon? We found a great spot for you in San Diego!

Offering elevated cocktails and crave-worthy cuisine in a lush, Japanese-style, open-air garden setting, at 5th & Sky you’ll be treated to spectacular views of downtown San Diego as well as the Coronado Bridge. It’s a fabulous place to eat, imbibe and socialize under the stars. Various firepits warming the patio-style seating, an ever-buzzing sushi bar and a hand-painted mural by artist Kahori Maki further sets the mood of this venue’s chic communal space, where you’re likely to leave having more friends in your social circle than when you arrived. 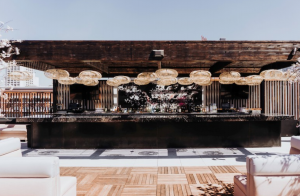 Given the Japanese orientation of the eatery, fresh sushi selections are the star of the show. Options unsurprisingly include the Gaslamp Roll, filled with crab, avocado and asparagus, topped with smoked filet mignon, avocado mousse, crispy shallots and unagi sauce. Other creative sushi selections include the Smoker Roll—a filling of cream cheese, avocado and smoked salmon topped with nori, smoked unagi and toasted sesame seeds; and the Gaudy Roll—a nori-filled delight with crab and cucumber, topped with ahi tuna, salmon, Hamachi and avocado.

The sharing-friendly menu also boasts a bevy of signature small plates from the kitchen, many of which I’ve also personally sampled and savored. My favorites include the pork belly and citrus-marinated yellow watermelon pops with jalapeño-maple syrup; and the Hawaiian Bigeye tuna poke with mango, cucumber, seaweed cracker and house shoyu sauce atop sushi rice. Both had a decent amount of pepper-driven heat for those who like to keep it spicy. Also a huge hit were the green shrimp ceviche mini tostadas topped with a generous portion of citrus-marinated shrimp, cucumber, cilantro, red onion, serrano pepper and a lime avocado mousse. From the land, my personal fav is the piquant BBQ short rib sliders with apple chipotle slaw—a plate of three savory sammies you’ll surely long for later on.  Had I any room to spare, I definitely would have indulged in the white cheddar lobster mac and cheese—a dish rife with fresh lobster ensconced in a blend of white cheddar and fontina cooked in a creamy sauce.

The food at 5th & Sky is certainly rivaled by its beverage program, which includes both traditional and some over-the-top cocktails all complemented by a curated wine list and local craft beer. Signature drinks to wet your whistle include the lychee martini, a combination of Belvedere vodka, yuzu, lychee and black cherry; spicy tamarind margarita, made with Don Julio Blanco tequila, tamarind vodka and lemon with Tajín rim; Oaxacan on Sunshine, a combination of Pierde Almas mezcal, Aperol, lemon and agave; and Double Black Smash, made with whisky, oranges, fresh berries and basil; among others.

The locale is open Thursday through Saturday from 4 p.m. to midnight and 11 a.m. to 5 p.m. on Sundays. Happy hour is offered from 4 to 6 p.m. daily, with half-priced cocktails and select appetizers. 5th & Sky also sets the mood for late-night energy, offering bottle service packages and often hosting various live DJs to keep the nightlife kicked into high gear.

In all, 5th & Sky is a lovely addition to downtown San Diego—an elevated alfresco restaurant and bar experience offering an intimate setting to relax, mix and mingle amid the picturesque San Diego skyline.